Sanders: China has done more to address extreme poverty 'than any country in the history of civilization' and moving, unfortunately, in a more authoritarian way in a number of directions 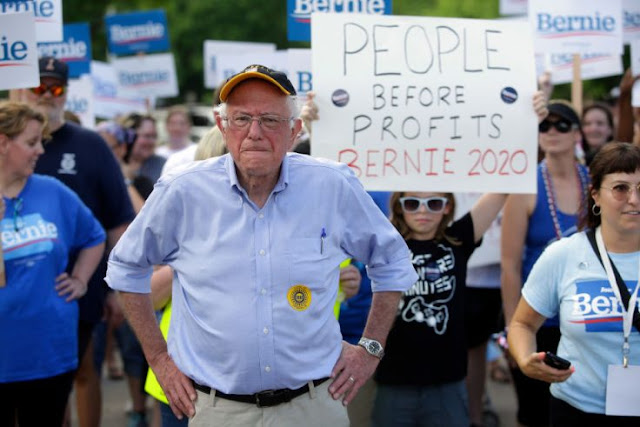 Sen. Bernie Sanders (I., Vt.) said that China has done more to alleviate poverty than any country in history during a Tuesday appearance on HILL TV’s Rising.

Granting that it is unfortunate that China is "moving" toward authoritarianism instead of democratic governance, the presidential candidate argued its record on poverty is the best in the world.

"China is a country that is moving, unfortunately, in a more authoritarian way in a number of directions," Sanders said. "But what we have to say about China in fairness to China and its leadership is, if I’m not mistaken, they have made more progress in addressing extreme poverty than any country in the history of civilization. So they’ve done a lot of things for their people."

Sanders had just finished denouncing "far-right authoritarian leaders" such as President Donald Trump and Israeli Prime Minister Benjamin Netanyahu, both elected leaders of liberal democratic nations, when he was asked about China at the 10:27 mark of the episode. HILL TV host Krystal Ball asked Sanders about his prior statement that normalizing trade relations with China would be devastating for America.


"Their economy now is struggling but I think it is absolutely possible for us to have a positive working relationship with China," Sanders said. He argued the problem with Chinese trade is that it benefits the wealthy too much, since companies can outsource labor to China where wages are lower.

He did not address how China’s communist government has oppressed religious people and minorities, putting at least one million Uighur Muslims in concentration camps while instituting one of the most comprehensive surveillance states in history. In China, the Communist Party requires all religions to pledge ultimate loyalty to President Xi Jinping, who is atop a one-party system that does not allow political opposition.

While Sanders did say trade with China is potentially bad for workers because of labor competition, he did not address China's violations of trade rules, such as intellectual property theft. As a socialist, Sanders has been a vocal opponent of free trade for decades.

But Sanders said he would "take a stand" against the Communist Party’s designs for Hong Kong, a former province of the British Empire that is now part of China but has special status.

"You gotta make a very strong statement that we in the United States—this is certainly not the case with Donald Trump—but historically at least, and under a Bernie Sanders presidency, we stand for democracy and we stand for human rights and we will do everything that we can to prevent oppressive governments from forcefully denying people their democratic rights."

Hongkongers have freedoms not enjoyed on the mainland, but the police have brutally suppressed recent protests, and many are concerned China will use the military to put down political dissent in the city.

Living standards in China are inferior to those of its democratic neighbors Japan and South Korea, but their economy has grown in recent years as it has instituted more capitalist structures in its economy. Contrary to what Sanders said, it has not been "moving" toward authoritarian government, but rather has long had it. Its founding leader Mao Zedong was responsible for an estimated 35-45 million deaths in the 20th century, and even after he died, political dissent was suppressed repeatedly, most notably at Tiananmen Square.

In China, information is rigidly controlled regarding topics such as Tiananmen and Mao’s Cultural Revolution.