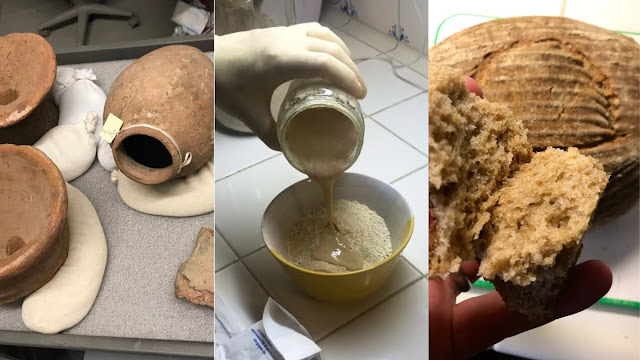 If you've ever wondered what bread might have tasted like 4,500 years ago in ancient Egypt, don't ask Brendan Fraser. The answer potentially lies in the hands of scientist and Xbox creator -- what hasn't this guy done? -- Seamus Blackley.

Blackley recently documented his quest to harvest 4,500-year-old yeast found within ancient pottery on Twitter, where his thread chronicling the endeavor went viral, much to the joy of bread nerds everywhere. He spent a week feeding the yeast sample until it was bubbly and ready to be baked in bread, and from there he crafted a loaf using freshly milled ancient grains -- you know, to maintain the whole ancient theme he was going for.

The result was sourdough that rose beautifully and contained what Blackley described as a "light and airy crumb."

Two weeks ago, with the help of Egyptologist @drserenalove and Microbiologist @rbowman1234, I went to Boston’s MFA and @Harvard’s @peabodymuseum to attempt collecting 4,500 year old yeast from Ancient Egyptian pottery. Today, I baked with some of it... pic.twitter.com/143aKe6M3b
— Seamus Blackley (@SeamusBlackley) August 5, 2019

And here is the result. The scoring is the Hieroglyph representing the “T” sound (Gardiner X1) which is a loaf of bread. The aroma is AMAZING and NEW. It’s much sweeter and more rich than the sourdough we are used to. It’s a big difference. After this cools we will taste! pic.twitter.com/sYCJ8uP1oj
— Seamus Blackley (@SeamusBlackley) August 5, 2019

The microorganisms within yeast can lie dormant for centuries, and though Blackley acknowledged in his thread that the sample of yeast they pulled undeniably contained contaminants, he also wrote it "also likely contains actual ancient yeast strains." Is it an authentic replica of what people at in the time of the pharaohs? No. Is it probably the closest thing to it that's been made in centuries? Probably.

"The aroma is AMAZING and NEW," he said in tweets with photos of the finished product. "It’s much sweeter and more rich than the sourdough we are used to."

What we really think he meant to say, however, is that the aroma is amazing and old -- 4,500-years-old by his estimate. So far, it doesn't sound like Blackley will be sharing the ancient yeast with anyone while he continues his research, but we must admit it'd be cool to bake in the way of an ancient civilization. Let's get this bread.