Solar Power Is Playing A Growing Role To Save The Bees

No Comments
The US Department of Agriculture has announced that it will no longer track honeybee populations or collect data for its Honey Bee Colonies Report. Data collection for the report from January 2018 through April of this year pointed to the worst honey bee hive loss on record, when beekeepers reported a 40% reduction in bee colonies last winter. But, in the absence of US federal funding, did you know solar energy is playing a growing role to save the bees?

As the Trump Administration turns its attention away from diminishing bee populations, solar companies are stepping up to turn solar farms into pollinator-safe havens. Solar project developer Community Energy has outfitted its project at a Pennsylvania college with pollinator-friendly plant seeding and bee-boxes to promote bee colony health, part of its larger mission of employing land-use best practices as a business habit. 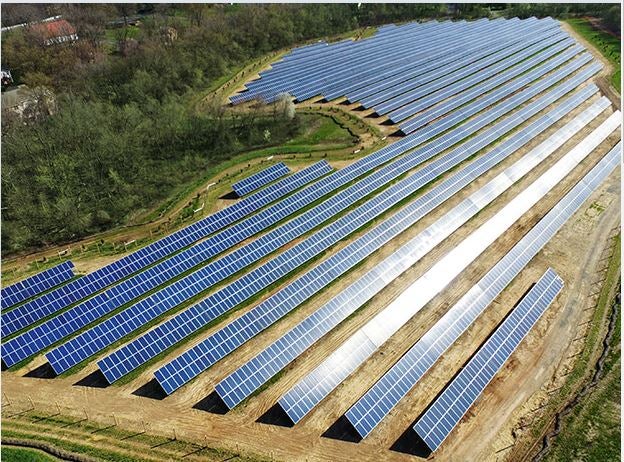 Community Energy solar project at Elizabethtown College, PA. Approximately 60,000 commercial honey bees are cared for in the beehives under the Elizabethtown solar panels.

The Agricultural Department had been a key source of data on bees, which is critically important to scientists and farmers. The USDA survey was begun in 2015 and has collected data on the number of honeybees by state each quarter. It also counted those bees lost to Colony Collapse Disorder, which is decimating honeybee populations.

A single bee colony can pollinate 300 million flowers each day, and bees help pollinate a third of all the crops people in the US eat. Dr. Ann Bartuska, acting chief scientist and acting under secretary for research, education, and economics in animals research and science at the USDA, says, “Pollinators are a vital part of agricultural production. In the United States, more than one-third of all crop production – 90 crops ranging from nuts to berries to flowering vegetables – requires insect pollination. Managed honey bee colonies are our primary pollinators, adding at least $15 billion a year by increasing yields and helping to ensure superior-quality harvests.” 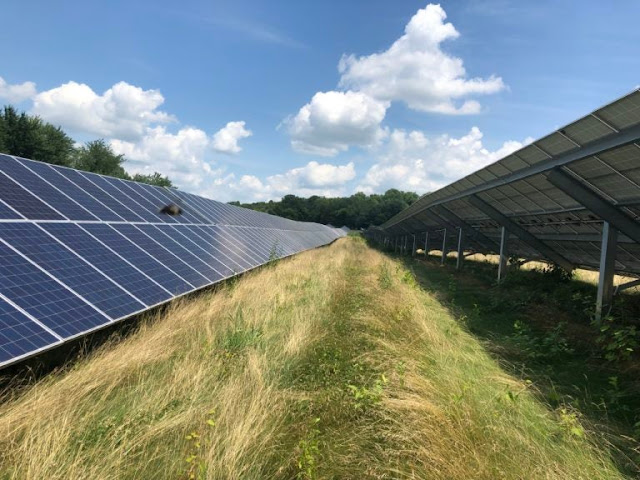 The US Department of Agriculture’s National Agricultural Statistics Service (NASS) acknowledged in its announcement to cut funding that the Honey Bee Colonies report had allowed the USDA, beekeepers, and other interested parties to compare quarterly losses, additions, and movements and to analyze the data on a state-by-state basis. “The decision to suspend data collection was not made lightly but was necessary given available fiscal and program resources,” a department statement indicated.

Why have the aggie gurus decided to delete tracking the plunging honeybee population from their to-do lists? A budget shortfall. Really? This budget cut comes at a time when the USDA needs to pay farmers an extra $27 billion in subsidies to offset the effects of Trump’s trade war.

Saving the ecosystem to ensure food production for the planet is less important to the #fakepresident than posturing on the international stage. Behind the scenes, he kowtows to them that brought him — to the detriment of the nation and planet.

The Environmental Working Group got data on where Trump's subsidies to farmers have gone. They shared it with The Post. https://t.co/76eQzbtj2O
— Philip Bump (@pbump) August 1, 2019

Helping the Bees Continues Even as the US Government Acts Irresponsibly

The Agricultural Research Service is conducting research to improve the nutritional health of bees, to control the Varroa mite and other pests and pathogens, and to understand the effects of pesticides on colonies. It is in the midst of a series of long-term studies to determine causes and evaluate treatments for Colony Collapse Disorder and other kinds of bee mortality, and it is establishing a bee gene bank to help breed traits such as resistance to pests or diseases and pollination efficiency.

The Argonne National Laboratory is another agency studying bees; its emphasis is on solar energy facilities with pollinator habitats on site. Its hope is to rehabilitate pollinator populations that play a crucial role in the national and global agricultural industries. Loss of such species, these researchers say, could devastate crop production, costs, and nutrition on a global scale. Looking at over 2,800 existing and planned USSE facilities in the contiguous United States, researchers in Argonne’s Environmental Science (EVS) division have found that the areas around solar panels can provide an ideal location for the plants that attract pollinators.

And fields of blooming flowers around solar arrays are just the start.

In 2015, a pollinator-friendly solar farm in Middlebury, Vermont became the first US solar facility to host commercial beekeeping before the practice spread to the midwest and west coast. As chronicled in Fast Company and Scientific American, the apiary and ground cover is part of an effort to rethink how land for clean energy can be used to supply more than just kilowatts.

Why is Solar Such a Good Fit for Bees & Native Pollinators?

Co-locating solar farms and honey bee apiaries was pioneered in England around 2010 when a solar company called Belectric let local beekeepers set up hives at a handful of its UK solar farms. The project was a success, and other countries and companies followed their example.

Community Energy, Inc. is one such company. It provides reliable, carbon-free energy including grid-connected solar, wind, and storage projects. The 2.6 MW (DC) Elizabethtown College solar project utilizes a fixed-tilt racking system and is expected to produce around 3,300 megawatt-hours annually. The power is delivered to Elizabethtown College, which also hosts the site.

But the Elizabethtown College solar site offers more than the typical solar farm, which can provide space for much-needed habitat. This site is also a  “solar apiary” – a solar energy project designed to benefit pollinators. For nearby farms growing crops that rely on pollinators – at a time when thousands of wild pollinators are at risk of extinction – this type of project plays a role in supporting the food supply. 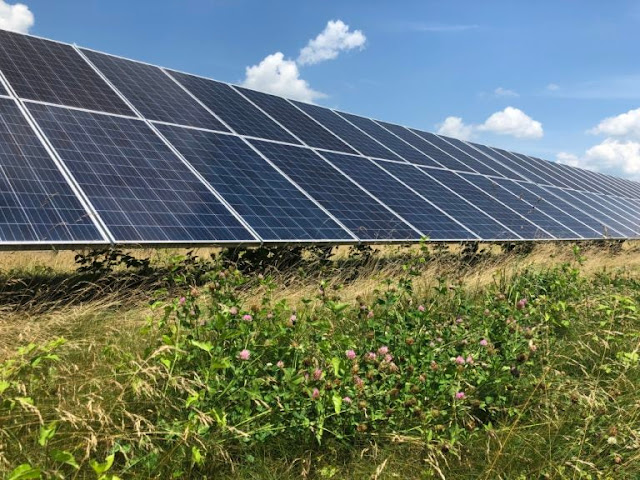 Community Energy’s efforts to promote pollinator health at its Elizabethtown project reflect the land use best practices it employs across its utility scale projects. 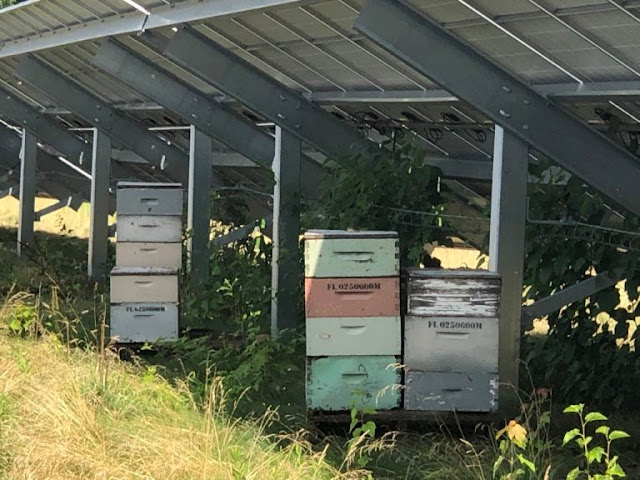 Photo of beeboxes at Elizabethtown College from Community Energy, Inc.

In an exclusive comment for CleanTechnica, Community Energy CEO and co-founder Brent Alderfer says that pollinator-friendly practices at the Elizabethtown solar farm are quite compatible with agriculture.


“Solar and farming go hand in hand. In fact, solar is one of the best tools we have for preserving farmland under development pressure. By incorporating best practices for sustainable land-use at our project sites, we improve land quality and ecosystem health–creating pollinator safe-havens, preserving topsoil, increasing per-acre revenue for farmers, and guaranteeing improved farmland for the next generation at the end of the 25-year harvest of solar energy. That’s crucial for farmers, farm families, and all of us who depend on their crops and our energy.”

Tom Tuffey, principal and beekeeper at Elizabethtown College, acknowledges the importance of respecting the natural world alongside renewable energy in an exclusive comment for CleanTechnica.


“Bees and native pollinators pollinate approximately 70% of crops, making them indispensable to agricultural output and food security. Pollinator populations have been steadily declining for years due to loss of habitat. As the solar industry continues to expand, there’s an opportunity for project developers to reverse this trend by incorporating sustainable land-use practices that support pollinator ecosystem health.”