No Comments
A fake video of Mark Zuckerberg giving a sinister speech about the power of Facebook has been posted to Instagram. The company previously said it would not remove this type of video. 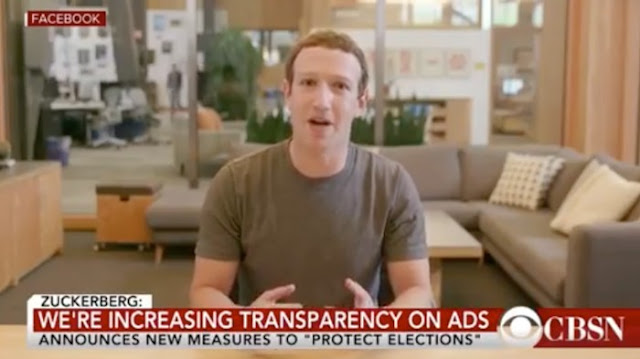 Two artists and an advertising company created a deepfake of Facebook founder Mark Zuckerberg saying things he never said, and uploaded it to Instagram.

The video, created by artists Bill Posters and Daniel Howe in partnership with advertising company Canny, shows Mark Zuckerberg sitting at a desk, seemingly giving a sinister speech about Facebook's power. The video is framed with broadcast chyrons that say "We're increasing transparency on ads," to make it look like it's part of a news segment.

(On Tuesday evening, CBS requested that Facebook take down the video, as it displays "an unauthorized use of the CBSN trademark,” a spokesperson said.)

"Imagine this for a second: One man, with total control of billions of people's stolen data, all their secrets, their lives, their futures," Zuckerberg's likeness says, in the video. "I owe it all to Spectre. Spectre showed me that whoever controls the data, controls the future."

The original, real video is from a September 2017 address Zuckerberg gave about Russian election interference on Facebook. The caption of the Instagram post says it's created using CannyAI's video dialogue replacement (VDR) technology.

This deepfake of Zuckerberg is one of several made by Canny in collaboration with Posters, including ones of Kim Kardashian and Donald Trump, as part of Spectre, an exhibition that took place as part of the Sheffield Doc Fest in the UK.


‘When there’s so many haters...’ (2019) [SOUND ON] This is UNREAL! @kimkardashian on the Spectre project and the truth about being an online ‘Influencer’. VDR technology by @cannyai #spectreknows #deepfake #deepfakes #contemporaryartwork #digitalart #generativeart #newmediaart #codeart #contemporaryart
A post shared by Bill Posters (@bill_posters_uk) on Jun 1, 2019 at 3:47am PDT


“We will treat this content the same way we treat all misinformation on Instagram," a spokesperson for Instagram told Motherboard. "If third-party fact-checkers mark it as false, we will filter it from Instagram’s recommendation surfaces like Explore and hashtag pages.”

Following the viral spread of a manipulated Facebook video of House speaker Nancy Pelosi, Facebook has been forced to take a stance on whether fake or altered images are allowed to stay up on the site. Instead of deleting the video, the company chose to de-prioritize it, so that it appeared less frequently in users' feeds, and placed the video alongside third party fact-checker information.

At the time, Neil Potts, Facebook’s director of public policy, said that if someone posted a manipulated video of Zuckerberg like the one of Pelosi, it would stay up. Now that there's a deepfake of Zuckerberg implying he's in total control of billions of people's stolen data and ready to control the future, on Facebook-owned Instagram, that stance will be put to the test.

Canny's founders, Omer Ben-Ami and Jonathan Heimann, told special effects blog FXGuide that their work comes after algorithms developed by University of Washington researchers, which turned audio clips of people speaking into realistic videos of people made to look like they're speaking those words. The UW researchers demonstrated this, at the time, using Barack Obama's face. They said they're also inspired by Stanford's Face2Face program, which enabled real-time facial reenactment.

Ben-Ami told Motherboard that to create the fake videos, Canny used a proprietary AI algorithm, trained on 20 to 45 second scenes of the target face for between 12-24 hours. That doesn't seem like much, but we've already seen deepfakes made from as little as one image of a face.

For the Zuckerberg deepfake, Canny engineers arbitrarily clipped a 21-second segment out of the original seven minute video, trained the algorithm on this clip as well as videos of the voice actor speaking, and then reconstructed the frames in Zuckerberg's video to match the facial movements of the voice actor.

The result is fairly realistic—if you leave the video muted. The voice superimposed on the video is clearly not Zuckerberg, but someone attempting an impression. But this deepfake blinks, moves seamlessly, and gestures like Zuckerberg would.

Ben-Ami said that Canny saw this as both an opportunity to educate the public on the uses of AI today, but also to imagine what's next. "The true potential we see for this tech lies in the ability of creating a photo realistic model of a human being," he said. "For us it is the next step in our digital evolution where eventually each one of us could have a digital copy, a Universal Everlasting human. This will change the way we share and tell stories, remember our loved ones and create content."