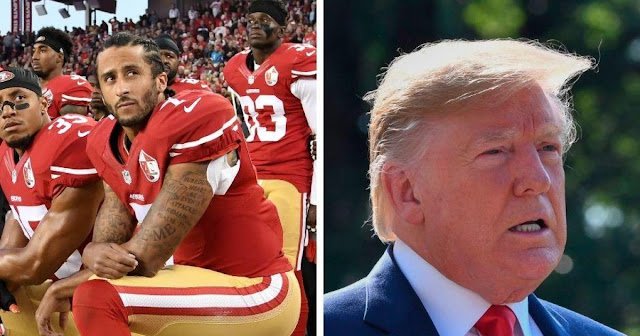 President Trump on Friday told White House reporters he would “love” to see former quarterback Colin Kaepernick get another chance to play in the NFL -- “if he’s good enough.”

Trump, who's been one of the most prominent critics of players kneeling during the anthem since Kaepernick started the trend in 2016, said he believes some team would sign him should they feel like he’s “good enough” to play in the league again.

“I think if he was good enough — I know the owners. I know Bob Kraft. I know so many of the owners — if he's good enough they'd sign him...they will do anything they can to win games," Trump said. “Frankly, I'd love to see Kaepernick come in if he's good enough. But I don't want to see him come in because somebody thinks it's a good PR move.”

Kaepernick has not played in the NFL since the 2016 season with the San Francisco 49ers. He led the team to the Super Bowl against the Baltimore Ravens during the 2012 season, but the 49ers lost.

Nonetheless, Kaepernick tweeted earlier this week that he was “still ready” to play.

In his time away from the NFL, Kaepernick has been involved in a number of social activism organizations and founded the “Know Your Rights Camp,” which teaches young children about self-empowerment, American history and legal rights.

Kaepernick also signed a deal with Nike last summer in which he received his own branded clothing. Some NFL and NBA players were seen last season wearing black Kaepernick jerseys.

He, along with former teammate Eric Reid, also settled a grievance lawsuit with the NFL in February. The two alleged they were blackballed from the league because of their protests during the national anthem. Reid has since signed with the Carolina Panthers.

In six seasons with the 49ers, Kaepernick amassed 12,271 passing yards, 72 touchdown passes and 30 interceptions. His overall quarterback rating is 88.9 and he only had one season in which he reached double-digit interception totals.